A team of engineering students from Delft University of Technology have won the top prize in a US competition inspired by Tesla’s Elon Musk to design a futuristic form of transport. 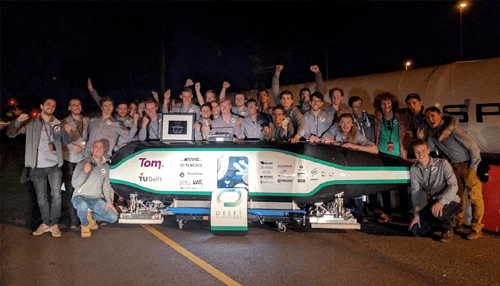 The hyperloop is a passenger and freight transportation that propels a pod-like vehicle through a near-vacuum tube at more than airline speed.

A team of engineering students from the Delft University of Technology has won the top prize in a US competition inspired by Tesla’s Elon Musk to design a futuristic form of transport. In total, 27 university teams took their machines to the SpaceX headquarters in California for testing.

‘We wanted to make a good contribution to innovation,’ she told website Nu.nl. ‘So we focused not only on speed but on efficiency in building and the cost and safety of the capsule.’ The Delft capsule traveled through the tube at around 90 kph. If the hyperloop ever becomes a reality, the aim is to attain speeds of up to 1,000 kph, Nu.nl said. 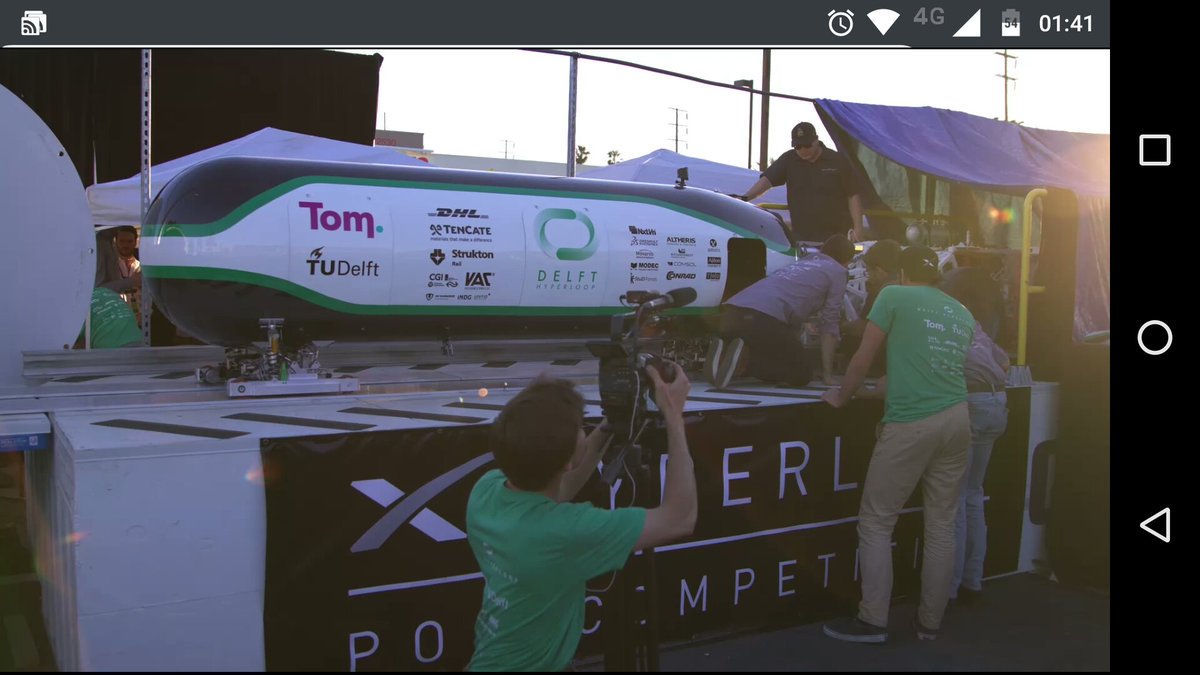 Elon Musk speaks during the first Hyperloop pod competition that took place along side SpaceX Sunday, January 29, 2017, Hawthorne, CA. The Hyperloop pod is a concept by founder Elon Musk envisioning fast travel through a vacuum-sealed tube and hosted a competition for teams to compete their design.

A new mass transit system that sounded like a crazy futuristic idea a few years ago was brought to three-dimensional life in Hawthorne on Sunday, as young engineering teams from around the world tested prototype pod-vehicles in the first Hyperloop competition.

The technology, introduced to the world in a research paper written by SpaceX and Tesla founder Elon Musk in 2013 that described the basic principles of thrusting a passenger pod through a vacuum-sealed tube at supersonic speeds, was re-imagined by teams who trekked to Hawthorne with their complex homemade vehicles in tow.

The students — mostly from colleges but also including a high school team from Texas — spent more than a year designing and building their contraptions with the help of sponsors and only basic conceptual instructions from Hawthorne-based Space Exploration Technologies Corp. (Because less instruction means more innovation.)

Musk had a white three-quarter-mile, 6-foot-diameter tube constructed along Jack Northrop Avenue for the event, which drew 27 teams from six countries. The tube will stay put for a second competition this summer.

ALSO READ:  A TRAIN INTO SPACE?

“This was done to encourage innovation in transport technology,” Musk said in a press conference before the competition. “To really just get people to innovate and think about doing things in a way that’s not just a repeat of the past, but to explore the boundaries of physics and see what is really, really possible.

“I think we’ll find that it’s way more incredible than we ever realized. That’s really the overarching purpose of this Hyperloop competition. I think it’s going to be ultimately something that inspires the world and results in real transportation technology.

“Congrats to everyone. I’m amazed at what the student teams have done. It’s really blown my mind.”

Hawthorne Mayor Alex Vargas attended and said he was thrilled to have the event in his hometown.

“I’m excited not only that we’re hosting them here, but that we’re partners in all this,” he said. “This project is taking us leaps ahead, and it’s all happening here in the city of Hawthorne.”

Only three teams passed SpaceX’s rigorous 101-point review of their pods’ structural, mechanical, navigational and functional abilities to enter the vacuum chamber Sunday. But thousands of young engineers who have been working long days and long nights in the lead-up to the competition showed off their work at street-fair-style booths.

Delft University of Technology’s 329-pound pod only needed the power of a light bulb to run through the tube. The team, from the Netherlands, got the highest score of the competition.

“We worked very hard,” said team captain Tim Houter. “I feel like we’re pioneers. It’s the way the engineers going to the moon felt doing something no one’s done before.”

While commercial Hyperloop pods will ideally travel at about 300-700 mph, the prototypes on Sunday only made it to about 50 mph. Technical University of Munich reached 55 mph with its bullet-shaped, striped air-powered pod that levitated through the tube with magnets. An air compressor at the front reduced drag by pulling it through the machine.

“We’re glad we had the opportunity to do the full-competition run,” said team member Bailey Curzadd, a Texan studying in Germany. “You cannot test a vehicle like this without the vacuum tube.”

The team, sponsored by Airbus, had to transport its pod’s batteries and magnets via ship because they weren’t allowed on the plane.

“It’s a very complex technical system,” Curzadd said. “It’s very rewarding to have so many complex pieces of equipment working together. We put an enormous amount of work into it.”

Massachusetts Institute of Technology’s pod was the first to enter the tube and, though it only reached 44 mph instead of its planned 200 mph speed, everything else worked as planned, team members said.

“It’s very satisfying. We’ve been working on this the past year-and-a-half,” said team member Raghav Aggarwal. “We are going to relax and take a break now.”

UC Irvine’s HyperXite vehicle had a few hiccups in the final testing leading up to the competition and wasn’t cleared to enter the tube. But team members said SpaceX officials will let them come back and test it later in preparation for the summer competition. Their pod is one of only a few that used air-based levitation rather than magnets.

“We had a couple problems the first day,” said team member David Nguyen. “Projects like this are a lot of time and work. But it’s great that we’ve met so many amazing people and gotten reviewed by people in the industry.”

ALSO READ: THE QUADROFOIL Q2S IS A SUPERB PERSONAL WATERCRAFT

USC’s team didn’t qualify on Sunday, but members said they plan to come back again to test their pod on the track, which is the only one of its kind in the world. They completely overhauled their design plans about a month ago, deciding to build a mini-electric-car pod with 150 horsepower.

“It’s got its own propulsion and drive train,” Bryan Byrnes said. “We’ve learned a ton just by building it. We’re superstoked about it. For the next competition, we’re going to come back with guns blazing. We’re unbelievably proud of what we accomplished.”

UC Berkeley’s team had a problem with its controls and wasn’t able to enter the Hyperloop on Sunday, either. Like most of the pods brought Sunday, their prototype is propelled and braked by magnets.

“Eddy currents from the magnets cause it to levitate one-quarter inch off the ground,” said team member Brooks Barrett. “The thing I like most about this competition is there’s so much variety in the pods, so much innovation.”

Meanwhile, Musk has been promoting a tunnel-building project on his Twitter account for weeks that began construction Friday next to the Hawthorne airport, at Crenshaw Boulevard and 120th Street. The tunnel will be 50 feet deep and at least 50 feet wide, according to city permits obtained for the construction.

But Musk said he hasn’t decided exactly what he’s going to build, other than a walkway for SpaceX employees to easily get to their parking lot across the street.

Mayor Eric Garcetti, who introduced Musk at a Sunday press conference before the competition, said LA Metro will partner with him on the project. The agency previously tweeted Musk, offering to sell him its used tunnel-boring machine.

“We started digging a hole on Crenshaw just in front of SpaceX,” Musk said. “There’s a giant hole. So, that’s going to be the start for the tunnel-boring machine.

“We’re going to try to figure out what it takes to improve tunneling speed between 500 and 1,000 percent. So we’re just sort of muddling along. We have no idea what we’re doing. We’re going to get this (tunnel-boring) machine, take it apart, figure out how to make it go faster while still being safe and not affecting people on the surface.”

He anticipates using the findings from the tunnel project to improve roadway and train tunnel construction worldwide.

5 Startup Mistakes to Avoid Before Manufacturing