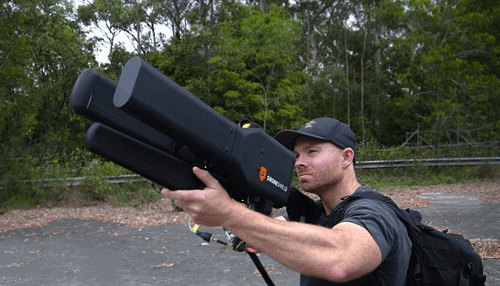 The ministry of defence of an undisclosed country in the Middle East has bought the DroneGun tactical unmanned aerial vehicle (UAV) jammer from DroneShield, in the first such sale to the region.

DroneShield said that the country is closely allied with the West and bought a test unit with a potential follow up order on a large scale to provide that country’s military with a counter-drone capability.

The order comes against a back-drop of rapidly rising terrorist activity, including Islamic State (ISIS) formally announcing last month the establishment of a new “Unmanned Aircraft of the Mujahideen” unit, a fleet of modified UAVs equipped with bombs. When announcing what effectively amounts to an establishment of an air force, ISIS also claimed that its drones had killed or wounded 39 Iraqi soldiers in a single week, DroneShield noted.

“Governments in the region and elsewhere are acutely aware of the threat posed by commercial grade drones adapted for unlawful use by terrorists, organized criminal networks, and other nefarious users. It is understood that the customer Ministry of Defence, as well as a number of other potential customers currently reviewing DroneGun, have undertaken an extensive review process benchmarking DroneGun against several competing solutions and, in the end, DroneShield’s products beat out the competition for several key reasons,” DroneShield said.

DroneGun is apparently effective against a wide range of UAVs and does not rely on individual “hacks” to take control of the drone. It can be utilized against a number of drones at the same time, and does not require consumables or reloading time. The unit weights around 5 kg and costs tens of thousands of dollars each.

It can disable UAVs from a distance of 2 km, using the 2.4 and 5.8 GHz frequencies. It can also jam GPS and GLONASS. “We are glad to both be on the right side of the fight against terrorism and deliver commercial success to our shareholders,” said DroneShield’s Chairman Peter James from Sydney.

In January 2017, the gun was used by Swiss police at the World Economic Forum in Davos.

With the proliferation of UAVs there has been an increase in counter-UAV technologies. At the high end of the scale, Airbus Defence and Space offers a complete counter-UAV solution that includes a Spexer 500AC radar, NightOwl Z thermal imaging camera and laser rangefinder, Skylark 7050C direction finder, UAV database and VPJ-R6 jammer. Other companies use a combination of visual and acoustic sensors as well as frequency scanners to detect UAVs.

After detecting a UAV, its operator can be located via a direction finder, the control signal can be hijacked, the UAV can be captured by another UAV with a net or a hook, the video link can be jammed or the GPS jammed or spoofed to steer the UAV off course.

Other options include using high energy lasers to disable UAVs, using a high powered electromagnetic field to overload its circuits, a water gun, net launcher and even birds of prey.

RELATED POST: THIS DRONE CAMERA WILL TAKE YOUR SELFIES TO THE NEXT LEVEL

Other companies are rushing into the counter-UAV market, with a UK consortium offering the Anti-UAV Defence System (AUDS – which has been selected by the US FAA for evaluation at US airports as part of its Pathfinder Programme), Selex ES offering tis Falcon Shield, and Israel Aerospace Industries offering its Drone Guard UAV disruption system using X-band radars to detect targets. There are at least 20 counter-UAV companies in the market today.