Airbus had focused all of their drone efforts in a military context, but with this initiative, Airbus seems to be sending a message to the market that it is ready to enter the commercial space. 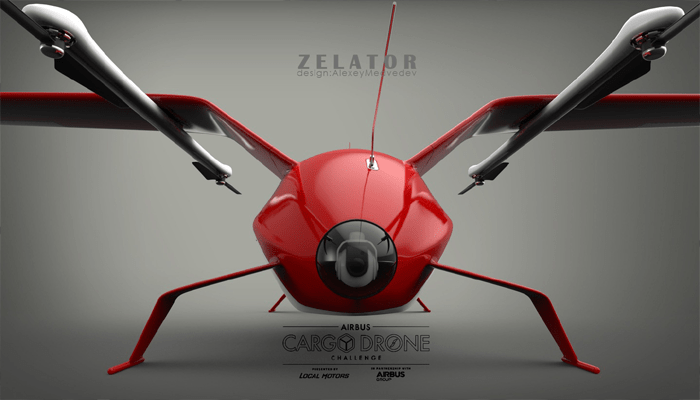 Until now, Airbus had focused all of their drone efforts in a military context, but with this initiative, Airbus seems to be sending a message to the market that it is ready to enter the commercial space.

The rules were simple and the objectives clear: to design a safe, easy to operate and affordable UAV solution adaptable for many different civil applications. The winner had to present a drone that allows for simple reconfigurations, in a safe and effective manner, for uses such as agriculture monitoring, infrastructure inspection, cargo delivery and/or humanitarian missions.

More specific requirements of the challenge were the ability to take off and land vertically and to have a considerable moving forward speed, so a pusher propeller was encouraged. The payload was specified at a minimum of 2.5 Kg (5.5 lbs) with a range of at least 100 kms (62 miles).

By May 22nd, the official deadline for submissions, 423 entries were received and after a period of validation and voting, three winners were declared for first, second and third place.

Zelator-28, a powerful UAV from the Russian designer Alexey Medvedev, was selected as the winner of the competition for its unique combination of speed, hauling capacity and VTOL capabilities. The design offers a powerful push engine which provides a forward thrust in the flight, but it was also chosen for its fastness and the presence of four smaller rotors which give a vertical lift. The modular cargo bay is easily loaded and guarantees fast turnaround deliveries.

In second place, Volans by California-based engineer Harvest Zhang found a very similar solution to the cargo challenge by placing four rotors aroud the center of the gravity and providing a pusher propeller for speed in vertical flight.

In third place the judges selected Minerva from D.F. Finger in Germany. This unique design offer a twin boom layout in which some of the heavier components are placed in these elongated structures thus reducing the wing root bending moment and helping reduce the weight of the wing structure.

What these three revolutionary designs have in common is that all four rotors which allow vertical take offs and landings are placed symmetrically in a square configuration around the center of gravity and all three models have a pusher propeller. That’s not to say these are any of the entries were especially similar though. In a recent interview, CEO & Co-founder of Local Motors Jay Roger mentioned that the variety they saw in the contest was incredible. “No two drones looked the same, and it was inspiring to see how big our community members can dream when given an outlet and an opportunity,” he said.

Perhaps the aircraft design community that helped select these three contestants from the 423 submissions received are signaling something in terms of load factor and flight efficiency. One thing is clear, though, there is an incredible amount of talent out there in aeronautical design and the partnership of these resources with well established companies like Airbus and Local Motors will surely result in revolutionary designs and optimization of current technology.

Congratulations to all three winners and to Airbus and Local Motors for the initiative.

3 Types of People Every Entrepreneur Should Try to Meet

50 Business Intelligence Tools You Must Be Aware Of