VentAllOut – An Emotion-based HealthTech is the new social platform

CrestlineBiz Solutions LLP is a young start-up based in New Delhi, India which also has a registered entity in Dubai, UAE. VentAllOut is one of the two platforms coming under this... 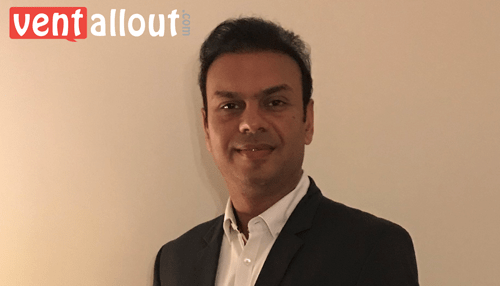 CrestlineBiz Solutions LLP is a young start-up based in New Delhi, India which also has a registered entity in Dubai, UAE. VentAllOut is one of the two platforms coming under this holding company. It is a social platform for “Freedom of Expression”.

It is a platform where users can share their frustration, comments, and opinions anonymously. This platform allows users to share their views on various categories such as – Politics, Current Affairs, Confession, Entertainment, Daily Drag, Relationship & Grievance. So whether it is pent up emotion against your boss, your family member, a confession for your secret love or certain view on Politics (which sometimes leads to getting trolled among your friends – in the given political scenario). They cover it all and people can share on this platform without any fear of being identified. The identity will not be known to other users unless they chose to do so.

Sumit Mittal is the founder of VentAllOut, a professional with over 19 years of experience in the Payments industry who turned into an Entrepreneur. He has experience in working for top financial service multinational companies such a MasterCard Worldwide and GE Capital across countries such as South Asia, the Middle East and Africa with assignments within GCC countries. Spent 17 years at MasterCard (out of which 11 years were in UAE) he was involved in six different roles across various geographies, preceded by two years at GE Capital – the founding team member of SBI cards launch in India. He also delivered senior roles at MasterCard, being Country Manager for Kuwait, Qatar & Oman and the last role was as a Senior Business Leader for the Middle East & Africa region.

Educated in both masters in Finance & General Management from Warwick Business School, UK, he is proud to have two patents under his name in the field of Cards Payment, filed in the US.

ALSO READ: 7 TIPS ENTREPRENEURS CAN USE TO CREATE THE PERFECT PARTNERSHIP

The journey began with few ideas brewing in mind but the real eureka moment came in late 2017 when the Founder decided to leave the corporate life and set-up a company on his own. The company was started in Jan 2018 with a license in India as well as in UAE. The start-up is also registered with DPIIT, India.

“An idea like this came from seeing the situation around us, where everyone is trying to portray a fake image or emotion of oneself on popular social sites. The media leaves you with a lot of questions unanswered since they show what garners them the highest TRP. Facebook has become a bragging network where people flaunt their expensive gifts or lavish vacations, WhatsApp groups are biased and the members troll people for having a view on and so forth. Whereas there is a no platform where people can share their feelings, frustrations, emotions without the fear of being judged- without the fear of having a bias or being branded. This gave rise to VENTALLOUT – Vent your pent up emotions! “… said the Founder.

There has been sprawling of centers in India and around the world in recent years, where you can express your anger by smashing old TV, fridge or cutlery and release your frustration. Well, we believe that frustrations cannot wait for you to travel across the city so we have created an online place for you to release anger instantly. While you may have to pay to smash TV, at VentAllout.com we reward you in terms of points and award for venting out… says the Founder.

ALSO READ: INVESTMENT TIPS FOR CONFUSED INVESTORS THAT ARE IMPOSSIBLE TO MISS

Stress and frustrations are the manifestations of humankind and people get frustrated more than once in a day. As per WHO, people are more stressed than before so this platform has been launched at the right time for people to share their stress and be relaxed and calm.

“We are targeting anyone who is social media savvy. It is a network concerning 18+ audience and an ideal platform for people who want to share their opinion without being judged, without the fear of having any bias or being trolled” said the team.

The customer’s base is diverse ranging from US, UK, Switzerland, Belgium Belize, Kenya and neighboring countries like Pakistan, Bangladesh, Sri Lanka, and it is growing constantly. Within a short period, the company has successfully garnered10,000+ registered users and is confident that it will be hitting higher numbers very soon.

The product has been kept very simple and yet engaging, starting from the user interface and user design. The sign-up process has been kept extremely simple where a user can sign-up using his/her Facebook or Google account or through email registration. In some countries, users can sign-up using mobile numbers as well. To make sure that the content is relevant to the user geography, they use IP services that assign the right data points and content specific to that region.

He believes in giving quality content back to the users and hence “Quality” of content is at the heart of the platform and focuses a lot on making sure that the content enriches people’s lives and derives something back from the interaction they have on the platform. To ensure the content is rich an algorithm is developed that does profanity checks, has a minimum character count so that users write a meaningful sentence, users share their mood, can capture a frustrating moment on their handheld device and post and also participate in the VPolls conducted regularly.

The Company is moving smoothly with the pre-revenue stage but is expected to start earning revenue by end of Q4’19 and the breakeven in the next 6-8 months and looking for Pre-Series A funding and is in discussion with some investors as we speak, said the Founder.

ALSO READ: 4 PROS AND 3 CONS OF BEING AN IT PROFESSIONAL

Besides this, the user gets witty awards from the VAO side to keep them engaged and above all gets reward points for every interaction they do on the platform which can be redeemed against exciting gifts and experience.

“We have an exciting set of product development that has been planned for Phase-2 of this platform which will have many more exciting features. First and foremost, we will make this platform available in vernacular and other foreign languages to reach non-English speaking countries and Tier-2/3 towns of India where the majority of masses reside” said the Founder.

We need people to vent on this platform while following the etiquettes of venting which have been mentioned on the home page. The primary focus is to ensure that the consumers are free from any stress and negativity, hence, this platform is a perfect spot for people to let out their office or home stress and feel calm and relaxed.