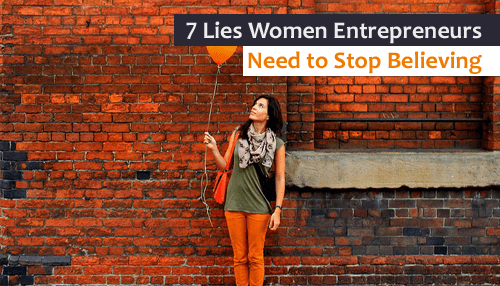 We all know that the number of women at the top levels of business is a fraction of what it should be. Women currently hold 4.4 percent of CEO positions at S&P 500 companies. Only 6 percent of partners in venture capital firms are women, and only 2.7 percent of companies funded by venture capital in 2014 had a woman CEO.

Young women working to change these statistics face an uphill battle. The world of tech is wildly aspirational, but it is not immune to the deep-seated gender biases that pervade our culture. Women encounter negative language — sometimes entire conversations — meant to erode our confidence. After nearly two decades of experience in this field, I want to share seven lies that women entrepreneurs use to defeat themselves:

1. My startup is the only chance I have for success.

Life is not a linear path. Have a clear goal, a sense of where you want to be 10 years from now — but be flexible on the steps in between. Life is not an exact, straight ladder to the top, and sometimes the sideways journeys teach us important skills or create unique opportunities. The only way I can get noticed is with a blockbuster startup, and since I don’t have one, I’ll never get noticed.

There is a lot of success bias out there, and make no mistake: It is harder for women. But there is a lot to be said for learning from the best environments. If you don’t have an idea for starting a company today, join a great company. Sheryl Sandberg is famous for saying, “When you see a rocket ship, get on board.”

You may succeed on your own, but you will go much farther if you build a mentor network. Try to build relationships with people first, before broaching the possibility of mentoring. Don’t be afraid to reach out to someone in a powerful position, but do it smartly: With a warm introduction and at the right time. Make it compelling for them to help you.

3. My idea is always the most important thing in the room.

Never forget about the people in the room. Your life’s journey will be heavily influenced by the people you choose to spend time with. Choose your co-founders, colleagues, friends and spouse wisely. When I met Meg Whitman at eBay, I was planning on asking her to be an adviser for my next startup. I was so focused on the “what” that I almost missed the “who.” After meeting the extended team at eBay, I realized I could have more impact on being part of a team-building a business that enabled millions of people around the world to make a living. My time at eBay was like doing four startups on steroids.

4. Tech is a meritocracy, and my idea will prevail.

Former Secretary of State Madeleine Albright is known for saying, “There seems to be enough room in the world for mediocre men, but not for mediocre women.” It may be 10 times harder for women to raise capital or move up the ladder. We must face moments when our work-life balance is out of whack. We must be prepared to feel like failures, and keep going anyway.

ALSO READ:  HOW WOMEN TO BECOME A SUCCESSFUL ENTREPRENEUR

5. Having a family will make me too “soft” to compete.

Absolutely not! Being a mom makes you a better executive. Both have to ruthlessly prioritize. One key lesson I have learned in both roles is to focus on people’s strengths. Ask yourself: What is someone’s best calling in life? How can they contribute most in this world or at your company?

With so few spots for women in the upper echelon, I can’t risk being eclipsed by a female colleague.

One more Madeleine Albright quote: “There is a special place in hell for women who do not help other women.” I can’t tell you how many times I have seen women compete with each other in the workplace. We have to help each other if we are going to move those percentages.

I know I deserve more, but I’ll be seen as greedy or pushy if I ask for it.

“Well-behaved women seldom make history.” Harvard historian Laurel Thatcher Ulrich wrote that line in 1976. She was referring to hardworking Colonial women whose sole acknowledgment came in their eulogies. Don’t think for a minute that this doesn’t apply to you. Please learn to negotiate for yourself. I have seen even the best women negotiators fight and win for their companies — but not for themselves. This is business! Demand what you are worth.

We still have a long way to go until we achieve true representation from women leaders. But today’s generation of young women will be a big part of that change. The sooner we see these untruths for what they are, the sooner we will take our rightful seats at the table.

Article Written by Stephanie Tilenius is the founder and CEO |VIDA