What are the Foreign Countries With Great Opportunities For Startups

Every entrepreneur wants to know where his/her business stands at a particular point of time. In this case, it will be wise to use...
Read more
Marketing

What is Entrepreneurial Marketing? Perhaps, you may be interested to know what it is all about. It is considered to be more of a...
Read more
Business

Making your business eco-friendly has a number of benefits – from helping Mother Earth to showing the world what an amazing and considerate person...
Read more
Resource

Entrepreneurs need to wear many different hats. The procedural aspect of running a business must be complemented by soft skills, which can be bad...
Read more
Home Business T-Mobile Wants to Turn Your Car Into a Mobile Hot Spot
Business
9:25 am

T-Mobile  has become the latest company seeking to take over your car.

Unlike efforts from the big technology players, however, the wireless carrier has an after-market device that consumers can in theory easily install in their cars. Called SyncUP DRIVE, the device plugs into your car’s on-board diagnostics port (OBD-II), which T-Mobile said has been standard on most cars built after 1996. SyncUP DRIVE is always on, doesn’t require charging, and users can manage it from their smartphone.

The new T-Mobile device requires a data plan, like any phone, and it turns your vehicle into a mobile hot spot. It also gives consumers extensive added vehicle diagnostic, safety, and security features, according to a press release.

“With T-Mobile SyncUP DRIVE, you have a new way to ride on America’s fastest nationwide 4G LTE network,” said CEO John Legere. “We’re making it radically simple for customers to connect their cars with a complete, all-in-one package — and the best part is that we’re making it totally free at launch.”

When the device launches on Nov.18 consumers can get the $149.99 SyncUp for free if they sign a two-year agreement with a 2GB or higher data plan. T-Mobile did not give a price for this plan, but it charges anywhere between $20-$95 a month for its one-line, for 2GB-22GB on its Simple Choice plan.

What is T-Mobile doing?

The company is seeking to make it easy for people to turn their vehicle into a connected car without requiring expensive installation fees. The company also says that its product is different than Verizon‘s (NYSE:VZ) Hum, because that after-market product uses 2G technology and does not offer Wi-Fi.

Hum connects to the OBD-II port as well, but the Verizon product is designed to monitor the vehicle’s health, access emergency assistance, and offer various traffic alerts. It’s not meant to turn a car into a hot spot. 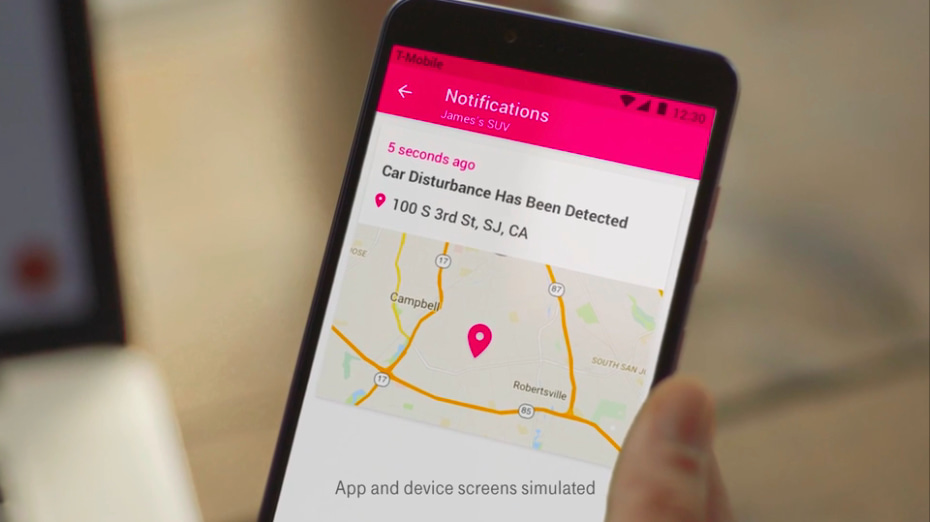 The new device also lets people track the location and status of multiple cars without contacting the drivers. Families (or business owners) can set speeding alerts and enable notifications to be alerted when a car enters or leaves a certain area. SyncUp also can track your car in a parking lot, making it easy to find, and alerts can be set up to let you know if your car has moved.

This is a bold move by T-Mobile

Cars are the next frontier for wireless carriers and technology companies. With SyncUp Drive, T-Mobile has delivered a seemingly easy-to-use device that offers more functionality than Verizon’s similar technology.

The car diagnostic and tracking features are useful with some seeming especially appealing to families containing young drivers. Most important for the company may be the mobile hot spot access. Any family traveling with kids will see the appeal of being able to go online with tablets, laptops or other devices at 4G speeds.

T-Mobile has not released pricing for data plans for the device, but assuming they are reasonable, this could be a major entree into a new market for the company. As long as data plans are reasonable (and in typical T-Mobile style there are no overage charges) it’s easy to see families opting to install one of these in their vehicles.

This solves a need without requiring very much effort. Ultimately this type of functionality may come factory-installed, but the sheer amount of used cars being sold and older cars on the road makes it so that day is still far away. T-Mobile likely has forced its way into the vehicle market by offering something where the uses are obvious and the cost, plus barrier to getting started, is low.

Every entrepreneur wants to know where his/her business stands at a particular point of time. In this case, it will be wise to use...
Read more
- Advertisement -
Marketing

What is Entrepreneurial Marketing? Perhaps, you may be interested to know what it is all about. It is considered to be more of a...
Read more
Business

Making your business eco-friendly has a number of benefits – from helping Mother Earth to showing the world what an amazing and considerate person...
Read more
Resource

Entrepreneurs need to wear many different hats. The procedural aspect of running a business must be complemented by soft skills, which can be bad...
Read more

6 steps you can take right now toward your financial goals

If you’re curious about the spending/saving trends among our generation, check out the 6 steps you can take right now toward your financial goals The goal:...
Read more
Marketing

Some Popular Types of Digital Marketing for Your Business

Digital marketing becomes very popular among many marketers these days. You are going to use this strategy for promoting your business on the Internet....
Read more
Entrepreneur

17 Harsh Realities of Being an Entrepreneur

If you have decided to be an entrepreneur then you should be warned that your journey ahead is not going to be an easy...
Read more
News

US company is ready to brew beer on Mars

Budweiser is keeping up its devotion, detailed in the relatively recent past at an event "South by Southwest" that "it would create a beer...
Read more
Entrepreneur

10 Tips to be a successful business tycoon

Entrepreneurship needs a different character than the employee. If you want to become a businessman or an entrepreneur, you need to be flexible and...
Read more
- Advertisement -

Every now and then, you would hear stories about inspiring female entrepreneurs. Yes, the world has seen many fascinating women, who have changed and...
Read more

Many a time, people tend to consider women entrepreneurs as a whole new world. The reality is quite different. All the characteristics of entrepreneurship...
Read more

The Best InstagramWordPress Plugins Developers Are Installing in 2020

Did you know that there are over 55,000 WordPress plugins available? WordPress is the most popular content management system that enables hundreds of thousands of...
Read more

The Science Behind Social Networking Sites

The bond between social networking sites and marketing is growing stronger on a daily basis. Almost all businesses rely on social media sites for...
Read more

A startup is a small company that can grow big very quickly. You can find many different startup companies with different purposes and categories....
Read more